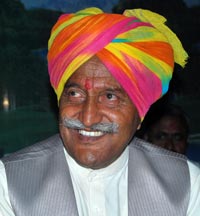 The 1971 Indo-Pak war saw mass exodus by the Sodhas, a Rajput clan, from Sindh in Pakistan to Kutch in Gujarat. The trickle of migrants has not dried up since. However, perhaps nobody has drawn so much attention as Ram Singh Sodha, a one-time minister and PML(Q) MLA from Sindh.

The resignation of Ram Singh Sodha, the Mithi constituency representative of Pakistan's Sindh province who moved to Kutch with his family eight months ago, has been accepted by the Speaker of Sindh Provincial Assembly.

Sodha's move to India marks a high point in a renewed wave of Hindu migration from an increasingly intolerant Pakistan. Hundreds of Pakistani Hindus fled to Rajasthan and Gujarat from Sindh, Kohat and Balochistan last year to escape religious persecution.

The former legislator's switch has sparked a controversy in Sindh, with TV channels scrambling for phone-ins with Sodha from his three-room rented house in Nakhatrana town.

Sodha, a Rajput, says: "I do not face any immediate threat. But looking at the way religious militancy is spreading in Pakistan and moving to Sindh, I decided to secure my family's future. Sooner or later we would have been forced to flee. Also with Rajput families becoming fewer, getting matrimonial matches was becoming a problem in Pakistan."

The feeling of insecurity that engulfed Pakistani Hindus after Partition has only increased over the years, Sodha says. He has applied for a seven-year visa as a first step towards Indian citizenship. A lawyer, Sodha first became an MLA in 1985 as an Independent and went on to become a minister for minority affairs. He was elected again 2008 on a Muslim League (Q) ticket. He has been the target of a smear campaign questioning his loyalty to Pakistan.

"I do feel the pain of living my birthplace and country but I have taken the step after deep thought. Nothing is more important that your family's security and well-being. Plus, the region I belong to was as good as part of Kutch before Independence," he says.