After Hindus now Parsi woman is abducted in Balochistan, Pakistan 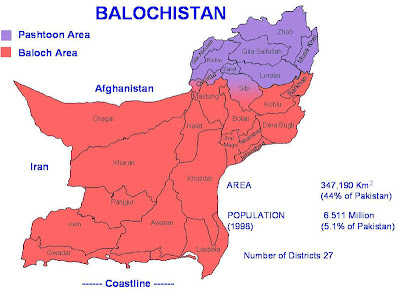 (Photo : Map of Balochistan, Which is the largest province (by area) of Pakistan, constituting approximately 44% of the total land mass of Pakistan. According to the 1998 census, Balochistan had a population of roughly 6.6 million)
QUETTA, March: Nilofar Abadan, the wife of a former provincial minister was kidnapped by armed men in the Quivery road area of the city on Tuesday.
Her husband, Faridoon Abadan, a Parsi, had been kidnapped over 10 years ago and remains missing to date.

Sources said that Ms Abadan was going to the Quivery road to visit Quetta Distillery, owned by her husband when the armed men took her away.

DIG Operation Hamid Shakeel said the armed men intercepted her car at a speedbreaker near the Gurdat Singh chowk and kidnapped the woman.

Later, the car was found abandoned in Al-Gilani road area.

He said that it was the first ever incident in which a businesswoman was kidnapped in Quetta.

Ms Abadan had been looking after the business of her missing husband after his kidnapping 10 years ago.

Soon after the incident, law enforcement personnel blocked entry and exit points and launched a search operation in different parts of the city.

A senior police official said over 20 suspects were detained during search operation and raids in different parts of the city.He said that some teams of law enforcement agencies were sent to the interior of Balochistan for recovery of Ms Abadan.

“We are investigating the kidnapping from different angles,” DIG Shakeel said.

Balochistan Minister for Minorities Affairs Basant Lal Gulshan said last month that there was a sense of insecurity among minority communities.

He said the Hindu community was still waiting for the safe return of their religious leader Lakki Chand Garji when another member of their community was killed during a kidnapping attempt in Quetta Feb 6.

As many as three Hindu traders have been killed so far during attempted kidnappings in and around Quetta during the past three years.

Gulshan said people belonging to the minority communities were being compelled to migrate to safer places.

Ram Singh Sodho, who was elected to the Sindh assembly in 2008 on a Pakistan Muslim League-Functional (PML-F) reserved seat for minorities, fled to India and sent in his resignation to the assembly speaker, Nisar Ahmad Khoro.