Hindu leaders in Pakistan say persecution is the main reason for the recent migration of members of their community from the country. 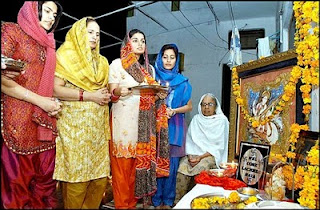 Photo: Pakistani Hindu women's performing Laxmi Puja on Diwali Festival in Karachi City of Sindh State)
Islamabad : Hindu leaders in Pakistan say persecution is the main reason for the recent migration of members of their community from the country.

“Every month a Hindu family leaves for neighboring India. Insecurity, killings, kidnappings and forcible conversion of women to Islam are the major causes,” said Jaipal Chabria, a Hindu politician in Pakistan.

The Human Rights Commission of Pakistan says that every year about 300 Hindu girls are abducted and converted to Islam against their will in Sindh province alone.

Hyderabad diocese’s Vicar General Father Samson Shukardin also referred to “increasing frustration” among minority groups. “Most of the cases registered from Hindu families are from the Haris (peasants) community. The recent murder of the only Catholic federal minister has also increased desperation among minority groups,” said the director of the National Commission for Justice and Peace in the Catholic diocese in Sindh province. “Many Christian families wish to leave the country but cannot do so because they are poor,” he said adding “Minorities are feeling left out.”

Out of a population of 170 million, 78 percent are Sunnis, 16 percent Shiites and 6 percent non-Muslims. Christians are the second largest minority after Hindus, who make up 1.6 percent of Pakistan’s population. About 90 percent of the Hindus live in the rural southern region.

The recent number of Hindus is the sharpest decline in contrast to 20 percent of the population at the time of country’s independence in 1947, Chabria said.

“The mass migration, the non return of the Hindu community is bad news. Other minority groups including Christians and Ahmadis are discriminated likewise,” said Pritam K. Rohila from the Association for Communal Harmony in Asia. “The younger generation do not trust the government any more and opt for living abroad,” he said. The use of religion for power and politics will only distance people from the county’s establishment, he added.

Media reports say about 30 temples remain out of 300 Hindu places of worship at the time of independence in Karachi.

Hundreds of Hindus and Christians are said to be among the accused
Posted by अखिल भारत हिन्‍दू महासभा at 11:00 AM