Karachi : There are hundreds of private jails in Sindh, Pakistan, which were built by landlords with help of local police. They have also political support from different parties. There are some 1.8 million landless agricultural workers (haris) in five districts of Sindh Province including Thatta, Dadu, Badin, Mirpurkhas and Umerkot. Most of these people are in debt bondage.

While bonded Labour exists throughout Sindh Province, the majority of those bonded in the north belong to the Muslim majority, while most of the bonded agricultural labourers in southern Sindh Province belong to Dalit (untouchable) and to tribal communities who have migrated from the drought-prone area of Tharparkar desert.

Poverty and starvation have forced these communities to accept the landlords' cash advances, and to be available for work from dawn to dusk. Bonded labourers may be detained or guarded to stop them escaping and in these situations of total ownership rape of women is not uncommon.

I made a documentary on Private Jail in Pakistan. During the recording, I met a lot of peasants. But I selected Mannu Bheel as a character, who is a Dalit belonging to the Bheel "sub-caste". In 1996, Manu Bheel briefly represented a story of change, when he was among 1000 bonded farm workers in Sindh province to be released. Most of them were "lower caste" Hindus, forced to work as bonded labourers in conditions resembling slavery after poverty had forced them to take loans from their landlords.

The release was followed by a rehabilitation programme after which Manu and his family managed to create a new life for themselves as wage labourers. But their happiness was short-lived. In 1998, two years after his release, nine of his family members were kidnapped, allegedly by men sent by his former landlord Abdul Rahman Mari. Manu Bheel rushed to the police. But the window of political opportunity that had secured Bheel's own release had meanwhile closed. Eight years after the kidnapping -- and after Anti-Slavery International had brought international attention to the case -- the Supreme Court ordered the police to recover Manu Bheel's family but the police claimed they were unable to do so. This prompted the Chief Justice of Pakistan to ask the Inspector General of Sindh Province to intervene.

But by May 2008, the case is still unresolved. And, Manu Bheel continues his 13-year long symbolic hunger strike that has become a symbol of the fragility of any improvements in the life of Pakistan's "lower caste" Hindus.

Many bonded labourers work for no wages, and food and clothing provided are added to their debt along with interest payments on the loan, thus increasing the debt on a daily basis. Most are forced to provide begar, a form of forced, unpaid Labour, on top of the tasks assigned against the debt. Trafficking in bonded labourers who are unable to pay their debts is a common practice among landlords.

Bonded labourers are sold by one landlord to another, usually for a price higher than the debt they had with their previous landlord thereby increasing the bonded labourer's debt. The Government of Pakistan should make clear that the Bonded Labour System (Abolition) Act 1992 should take precedence over the Sindh Tenancy Act 1950 whenever there appears to be a conflict in the interpretation of the law.

It should also consider whether the relevant sections of the Sindh Tenancy Act 1950 need to be repealed. Written By Aziz Sanghur 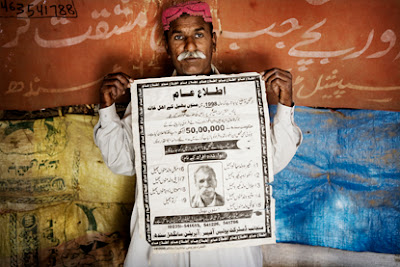 (Photo : Manu Bheel with a poster listing the names of his missing family members in Pakistan)
Note by Editorial : Gopinath Kumar (editor-in-chief)

Recently I spoke to Manu Bheel, a Dalit, who was freed from bonded labour in 1996 in Sindh province of Pakistan. His family then worked as wage labourers, but in 1998, nine of his family members were kidnapped, allegedly by men sent by his former landlord (Abdul Rahman Mari).

Anti-Slavery International had brought international attention to the case – the Supreme Court ordered the police to recover Manu Bheel’s family but the police claimed they were unable to do so. This prompted the Chief Justice of Pakistan to ask the Inspector General of Sindh Province to intervene.

But by now, the case is still unresolved. And, Manu Bheel did his five-year long symbolic hunger strike that has become a symbol of the fragility of any improvements in the life of Pakistan’s “lower caste” Hindus.

NOTE : During my recent conversation with Manuji, He appeals for support for his justice movement to recovery of his missing family for last 15 years. On 2nd April 1998 Rehman Marri along with another zamindar, Bashir Chowdri raided their transit residence with vehicle no. 0233 and kidnapped nine family members of Manoo who are still untraceable. Among those abducted were Khero (father, aged 70), Akho (mother, 60s), Motan (wife, 40), Talal (brother, 25), Momal (daughter, 13), Chaman (son, 10), Kanjee (son, eight), Dhanee (daughter one) and a relative Kirto.