"Is the government serious on the fight against Jihadi Terror ?" 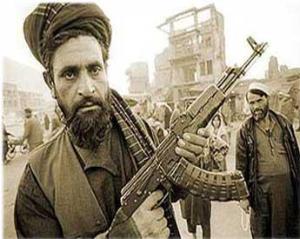 Represent: Dr. Santosh Rai
It was July 13, 2011. Three consecutive blasts in the heart of Mumbai shook the nation. Twenty-four innocent lives were lost bringing the nation's security preparedness and the effectiveness of intelligence agencies under the scanner once again. Investigative agencies were put on the job of finding out who executed the blasts. The government reiterated its stand on terrorism, promising to deal with it sternly. But despite all the claims made by the government, is it really serious about fighting terrorism? Sadly, there seems to be a huge gap between what is being said and what is being done at that level.


One of the main reasons why the government has been unable to tackle terrorism is the Congress party, leading the UPA government at the Centre. For long now the Congress party has not been able to shake off the mantle of divisive politics that it indulges in. The reason is it looks at everything related to terror through the communal prism of Hindu-Muslim and Majority-Minority community.

It is this approach that makes divisive and communal politics and forces in the country more powerful. It is also this divisive approach which is covered under the garb of words like 'secularism'. While Pak imported terror was only plaguing the Kashmir Valley all this while, in the last two decades terrorists, inspired, trained and sustained by Pakistan, have wrecked havoc all over the country. The time has come when the government looks at terror as an 'act against the nation', an anti-national activity instead of looking at all terror activities as communal.

On November 26, 2008 a ruthless terror attack killed 166 innocent people in Mumbai. Investigating agencies put on the job had found clear and ample evidence of ISI's (Pakistan's inteligence agency) involvement in the 26/11 attack. While the probe was still pending, on December 6, 2010, the national capital saw the release of an Urdu, book titled The Truth of 26/11- An RSS Plot? On 27 December the same year, a Hindi translation of this book was released in Mumbai. The book had been authored by Ajiz Burney, the then editor of Rashtriya Sahara, Urdu, and had 25,000 copies of both the translations printed in the first lot itself. While that was surprising, what came as a shock was the fact that both the Urdu and Hindi versions of the book were released by Congress general secretary Digvijay Singh. The book's attempt was to say that Mossad, CIA and RSS were behind the 26/11 attack in Mumbai.

Did Digvijay Singh agree with the contents of the book? Why was RSS being linked to the Mumbai attacks when investigative agencies were repeatedly talking about ISI's direct involvement in the Mumbai attack? On January 28, 2011, Rashtriya Sahara printed an apology on the front page of the newspaper after Ajiz Burney was served a legal notice for making baseless allegations about the RSS's involvement in the 26/11 attack. While that happened, few questions remain unanswered: Why did Burney write such a factually incorrect book? Who financed the publication of 25,000 copies each of both Hindi and Urdu versions? Where were these books distributed or sold? What was Burney doing in Karachi on November 26, 2008 when Mumbai was under the terror siege and innocent lives were. being lost in a brutal attack? Whom was Burney meeting in Karachi? These are questions that must be probed by the national investigative agency. Why did the Congress general secretary Digivijay Singh release the book in two separate places? With such support, it isn't surprising that the book was widely discussed in the Pakistani media. If that wasn't enough, almost as an award for his efforts at maligning the RSS, Burney was appointed as an advisor in Union Minister Kapil Sibal's Ministry. Perhaps the appointment was made only to appease a particular community and nothing else. It is all of this put together that makes one doubt the government's very intention to fight terrorism, making it clear that the government is not serious enough.

Tough situations require tough decisions just as extraordinary times need extraordinary measures. Dealing with a tough situation like terrorism requires tough decisions from the government. What is mandatory in this entire process is the fact that those found guilty of participation and facilitating terror activities should be strongly punished for their acts, serving as an example and a deterrent to others who might want to emulate them. But that's an aspect that the government has so far shied away from. Perpetrators of December 2001 Parliament attack are yet to be punished by the government. Afzal , an accused in the Parliament attack who was awarded death penalty by the Supreme Court through an order on August 4, 2005 is yet to be executed.

Why is the government silent on the issue? Six years since the Supreme Court order, only a month ago, on July 27, 2011, the government has taken a decision on his mercy petition and forwarded it to the President of India. On December 12, 2002, a full year after the Parliament attack, the Delhi Sessions Court ordered capital punishment for Afzal for conspiracy to attack Parliament on December 13, 2001, waging war against the country and murder. A year later, on October 22, 2003, Delhi High Court, hearing the case once again upheld the Sessions Court order of capital punishment. On August 4, 2005, the Supreme Court rejected Afzal's plea for mercy, upholding the High Court order for capital punishment, once more. Yet the government has done nothing to bring the perpetrators of terror to book. While it took the courts just four years to complete investigation and come to a conclusion, it has taken six years for the government just to move Afzal's mercy plea from the Home Ministry to the President's office. What is worth pondering over is that the issue is still inconclusive.

Strangely, the Congress party has not been upfront with its view on Afzal's death penalty issue. A year after Afzal had been sent to the gallows, Ghulam Nabi Azad, the then Chief Minister of Jammu & Kashmir had told, according to Times of India, that the, 'central government must rethink death penalty given to Afzal Guru.' Was this the view of the Congress? If not, then why did a Congress Chief Minister ask the government to 'rethink'? Does the Congress Chief Minister not trust the country's investigative agencies? Or is he mistrustful of the judiciary of the country? Clearly, what has driven this opinion is the Congress's basic attitude of looking at terror through the prism of communalism. This is the reason why, the Congress party cannot look at an act of terror simply as an act of terror. It must always communalise the whole issue and debate of terrorism. A case in point could be Ghulam Nabi Azad's subsequent statement where he insisted that in case the government pursued the court's order then 'Afzal Guru must not be hanged during the month of Ramzan.' Does this statement not reek of Congress's politics of communalism and Majority-Minority divisiveness, aimed at appeasing its own vote bank?

More recently, even as investigative agencies were struggling to probe the July 13, 2011 bomb blasts in Mumbai, a Congress general secretary, often described as the 'PM in waiting' by his own partymen, declared that 'it is impossible to prevent every terror attack.' Does a statement like this not undermine the government's very intention to tackle terrorism? Does it also not rub salt on the wounds of nation suffering at the hands of ruthless and relentless terror attacks? Another Congress general secretary, often dubbed as the 'mentor' or 'political guru' of the 'Congress's PM in waiting' went a step further, stating that the Mumbai blasts could be an act of 'Hindu terror' and must be probed accordingly. While Digvijay Singh's statement found huge resonance in the Pakistani media, an apolitical Aam Aadmi casually said to me, 'It would have been surprising if Digvijay Singh had not made such a statement.' However what needs to be asked is: Does Digvijay Singh run an investigative agency of his own? If he has any incriminating proof to substantiate his statement then he should give it to the investigative agencies instead of making random statements to the press. A much-thought-out delayed clarification was issued by Singh later saying that he was misunderstood. But he did not quote what exactly he had said.

Interestingly, Singh's statements over the last three or four months have generated all sorts of responses. Some say that Singh has lost his mental balance. Others more scathing in their opinion have suggested that he should admit himself to the mental hospital near Pune and seek medical help. Few others have even suggested that Singh's statements are a result of the huge international and national pressure being exerted on him to say so. Many also believe that Singh and his statements are not taken seriously by anyone in his own party. That aside, the fact remains; Singh is not just any ordinary person. Singh is the general secretary of the oldest political party in the country. It is this profile that makes his statements important and significant. Given the direction the investigation is going in, it seems Singh is making an effort to appease the minority community, trying to tell them that 'we are concerned about you.' And this vote bank politics is what explains the statements of the Congress's general secretary best. Singh's penchant for vote bank and divisive politics is what made him question the credentials of slain Police officer Mohan Chand Sharma in the Batla House encounter. It wasn't good enough for Singh that Sharma had been awarded the Ashok Chakra for his act of bravery by the President of India. Singh pursued the fake encounter theory only to serve his own purpose of vote bank politics. Singh's ridiculous statements on issues of terror sound astoundingly similar to the spokesperson of anti-national organisations like SIMI. And in that scenario, just who is bothered about the fight against terror?

It is unfortunate that the principal party in power at the Centre is not serious about fighting terrorism. Even as the police and other security forces strive hard and lose precious lives of our security forces to combat terrorism in this country Congress politics fails their effort. Congress's vote bank politics is lending power to the divisive forces in the country. The only sure way to tackle terrorism today is to ensure that patriots in all political parties including the Congress come together to fight terror, leaving aside their political interests and incentives.

A concerted effort to save the harmonious and nationalist fabric of the country needs to be made by politicians across party lines. After all these politicians must remember that their politics and political careers are possible only if the national unity, social harmony and democratic norms remain intact. There will be no politics without the country!