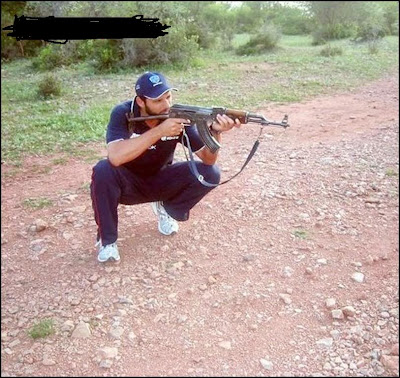 (Photo : Indians not as large hearted as Pakistanis: Shahid Afridi)
NOTE : Shahid Afridi, the losing Pakistani cricket captain is in the news again. In an interview, he said “In my opinion, if I have to tell the truth, they (Indians) will never have hearts like Muslims and Pakistanis”

Islamabad : Whenever these two archrivals meet, it generates great excitement for the 1.5 billion people of the subcontinent. The pre and post game mood and activities on both sides of the border provided some insight into each country’s progress towards nationhood.

The shadow of religion looms large in all aspects of life on both sides of the border — whether politics, culture or even sport. Even India's division into two nations was based on this. It is not surprising therefore that there is a tendency among the masses to use the prism of religion in reflecting on all sorts of matters. This sadly is taken to the extreme by religious zealots on both sides.

Days prior to the game, the media and people in both countries were talking of nothing else but the great encounter. Young and old, men and women, sport fans or not, all was consumed by anticipatory excitement preparing for parties to watch the game also to participate in the post-game celebrations. Firecrackers, national flags and paint to face national colors on their faces were being bought and sold. The media put aside Libya and any other major event happening in the world to give an overdose of pre-game analysis and anecdotes by erstwhile cricketers and pundits.

This was however not enough; there had to be a call by the fans for divine intervention on behalf of their team.

In Pakistan there were prayers being offered in mosques, religious leaders were reassuring the masses that victory would belong to them. How could God not intervene on the side of a Muslim nation which was playing against the Hindus?

In India the same thing was even more intense. Along with astrologers every temple and every holyman was kept busy offering prayers to the gods of victory and collecting temple offerings from devoted fans. What was even more striking was that these prayers were not confined to the Hindu temples but the churches, the synagogues, the Gurduwaras, even Muslim mosques and shrines, all buzzing with supplications. As if the whole of India had come together as one nation regardless of who was Hindu, Muslim, Parsi, or Sikh; the grievances of the minorities in India, Muslims  Sikhs and others against the Hindu nationalists/extremists did not stand in the way. India was one nation.

An exciting game ended by Pakistan losing .The Pakistanis who had prepared so much for victory celebrations were left with great disappointment and remorse. There has been so little for the people of Pakistan to celebrate in recent years that the only chance of recovering some of the pride as Pakistanis for them was squandered. In recent memory there has only been one street celebration that was shown on TV when the lawyers and others in Pakistan were throwing rose petals at the murders of the Governor of Punjab Salman Taseer!

In the post defeat period analysis and speculations go on. There has been the usual recital in Pakistan's media and gossip circles of how the match was fixed and how Pakistani players sold out to the bookies. Gambling and betting incidentally is entrenched in a big way in cricket.

As expected, in India the scene has been festive and jubilant. Endless parties have been going on since India's victory. Several post-game interviews and events were insightful and reaffirming not only India's evolution as a nation and its progress toward democracy but also its culture.

The families of players were interviewed for their reaction. A remarkable piece was the interview with a Muslim player’s family in which his burqa-clad mother and other members of the family expressed their thanks to Almighty for India's success and their son’s contributions  to it as a proud Indian. The bearded father was no less hesitant in expressing his pride as an Indian national celebrating his nation’s triumph against a country that professes to be an Islamic republic.

The interviews with team members were also insightful into the subcontinent’s culture. Every member of the team said that they did this for their country but they also added that this was for a senior member of their team who was a source of inspiration and strength for all the team members. He had made a huge contribution in putting Indian cricket on the world map as he has shattered one record after another. The team’s expression of genuine affection and admiration for this person was moving and made me pause and reflect how performance, consistency and character inspire and generate genuine respect for a leader from his colleagues and adulation from the public. There is a lesson in this for the political leadership in both countries.

Victory parades in every big city were held. The victory parade in Delhi showed Sonia Gandhi riding on top of an open car in a motorcade! How remarkable, I thought. In Pakistan if there were a victory celebration, not many present leaders including President Zardari would dare to step out. Without being cynical, Zardari and other leaders must be breathing a sigh of relief that they could avoid personal risk in their teams defeat. Besides the danger to the lives of politicians and leaders that such occasions present, the danger to the lives of celebrating fans from suicide bombers would be enormous.

The people in Pakistan can take some comfort out of this! It should reaffirm for them that God indeed is infinitely wise!

But seriously in the chronic state of depression and hopelessness that prevails among the masses in Pakistan today due mainly to total failure of leadership, the loss on the cricket field is yet again an opportunity to reflect and think. The institutional weaknesses created by power- hungry and corrupt leadership remains a major cause for Pakistan's lack of progress toward nationhood. The national identity remains fragmented along ethnic, provincial, sectarian and religious lines; the Pakistanis need to rethink beyond these lines. They must find different ways of forging and strengthening their national identity and not remain confused or manipulated by corrupt politician/leaders. Then only the Pakistanis can hope to celebrate victory and their slogan "jeethay ga bhai jeethay aga" resonate.


Below is link from Pakistan Hindu Post (PHP)
http://pakistanhindupost.blogspot.com/2011/04/cricket-victory-defeat-and-nationhood.html

What Hindus, which Muslims?