Sikhs seek compensation for terror losses in Pakistan, But No Hindus ? 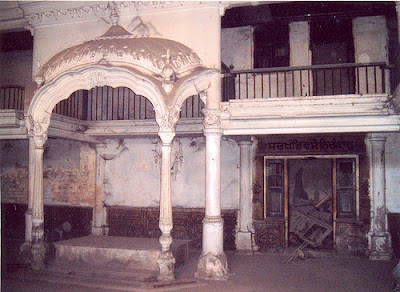 (Photo : Deserted Sikh Gurdawara in Abbottabad, NWFP or Khyber Pakhtunkhwa State of Pakistan)
Islamabad : Sikhs in Pakistan's Orakzai Agency bordering Afghanistan have asked the government to compensate the community for the huge losses inflicted on them by terrorists.
A group of Sikh leaders said that terrorists had burnt 26 houses, 18 shops and some factories of their community, Dawn reported Monday. The leaders included Parjeet Singh, Mahan Singh, Siren Singh and Dilbar Singh.

Sikhs were forced to pay Jazia - tax levied on non-Muslims - totalling Rs.6 million to the guerrillas. But they were still forced to leave their homes following a steep increase in militant activities.

Orakzai Agency is in the Federally Administered Tribal Areas (FATA) in the northwest of Pakistan that bore the brunt of terror attacks.

The Pakistan Army battled the Taliban in the mountainous region, and the rebels were evicted from many areas after fierce fighting.

The majority of the displaced Sikhs have returned to their original areas but are leading a miserable life as they have lost their properties.

They have asked the government to compensate them.

Local official Riaz Mahsud said the administration had assessed the losses of Sikhs and forwarded the report to higher authorities.

India had in 2009 taken up the issue of treatment of minorities with Islamabad after the Taliban persecuted Sikhs in parts of Pakistan.

Militants had then demolished the homes of Sikhs in Orakzai region after they failed to pay Jazia. Over 35 Sikh families have lived in Ferozkhel in Orakzai Agency for decades.

The Taliban had also occupied two shops and three homes of Sikhs. 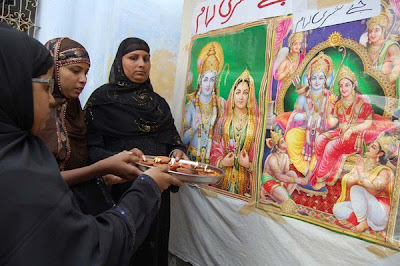 (Photo : Hindu women's celebrating Lord Ramnavami or Bhagvan Ramchandra birthday in Peshawar City of NWFP, Pakistan)
Note from Editorial : Peshawar the capital of NWFP derives its name from a Sanskrit word Pushpapura, meaning the city of flowers. Peshawar is old, so old that its origins are lost in antiquity. Founded over 2,000 years ago by the Kushan Kings of Gandhara, it has had almost as many names as rulers.

In the 9th century the provincial capital was shifted by the Hindu Shahi kings to Hund on the Indus. After the invasion of Mahmood of Ghazni, all traces of gentle, artistic Gandhara were lost.

Historically in Khyber Pakhtunkhwa State (NWFP) or FATA Hindus have being living for centuries alone with various ethnics like Pashtuns and Hazara Muslims community with peace and harmony.Many of the old Hindu Peshawaris still wear their traditional Pathani kurta pyjamas and Pathani kulla turban. But since 9/11 in America things have changed here, Recently alone with many other communities Hindu community have also gone throw lot of persecution by extremist Taliban and also during war against terrorism led by Pakistani Army backed by western powers. Many poor Hindu families have either taken shelter/refugee in Peshawar Gurdwara (Sikh temples) or rich Hindus have opted for India.

Rajesh Kumar (PHP Islamabad) : Among minorities, Sikhs and Christians groups have backup with government establishment and even International Sikhs charity groups from Canada,USA and UK are helping local Sikhs groups in Pakistan. But unfortunately no International Hindu charity organization has ever cared for Hindus in NWFP or mostly rest of Pakistan.

A.Randhawa (PHP NWFP) : These discrimination against Hindus and with no active functional Hindu Charity organization has encouraged many poor persecuted Hindus to either convert to Islam, Christianity or Sikhism or run toward secular India for survival.

Dayal Kakkar (PHP Peshawar) : During Talibanzation period many Hindus have migrated to India from FATA and NWFP areas and some have taken refugee in historical Sikh Gurdwaras or Temples inPeshawar City alone, where they have or are in process of converting day-by-day into Sikhism. Lack of unity among various fractional Hindus group like Balmiki samaj, Schedule Caste or Upper Caste has also led us in Delusion.

Ramesh Kumar (PHP Director) : Hindus need to be united and should equally demand for rights or compensation from Pakistan government in similar to Sikhs community or any other persecuted community in Pakistan. We will raise the issue in upcoming workshop in Islamabad soon held by HRF/SCRM of Pakistan.

Gopinath K.Rajput (Executive Editor) : In Pakistan mostly Christian and Sikhs missionary are active from beside of Muslims charity organizations, So Hindus are left with no option either migrate to India or some other safe places or just denounce there faith for charity help. International Hindu groups should come forward to show solidarity with small but very crucial Hindu community in north western Pakistan.

NOTE : PHP is presently connected to various Hindu groups in Peshawar and rest of NWFP. If any one has any question, comment or wants to contribute in any way is welcome to contact as
Posted by अखिल भारत हिन्‍दू महासभा at 11:25 AM