Mangalore:Karnataka Komu Sauharda Vedike has strongly condemned a recent statement made by Swami Pranavananda of the All India Hindu Mahasabha stating that  a Khadga Deeksha programme of distributing swords to 5000 youth will be held in Mangalore on October 25.

peaking to reporters here,  Suresh Bhat Bakrabail, District President of Karnataka Komu Sauharda Vedike  said any such move to hold the programme would be against the laws of the land. He said possession of lethal weapons on the pretext of protecting   Hindu Dharma, women and cattle is not acceptable.
He also suspected this to be a political ploy in the wake of the 2014 general elections and added any attempt to hold such programmes in the district  may trigger tension. Bhat also demanded action against people  who have planned such programmes.
P B D'Sa, Choodamani N Bangera, Aboobakkar, Kabir Ullal and Walter Maben were also present.

Charging that certain organisations were trying to create an environment of communal intolerance and disturb the communal harmony in Dakshina Kannada ahead of Lok Sabha polls and religious festivals, members of Karnataka Komu Souharda Vedike (KKSV) condemned the announcement of ‘khadga deeksha’ by state executive president of Akhila Bharata Hindu Mahasabha Swami Pranavananda.
Addressing media persons at a press conference here on Tuesday, KKSV president Suresh Bhat Bakrabail said that the choice of Sanskrit terminology to distribute swords to the youth was deliberate and intended to glorify what was obviously an unlawful act.
Stating that the Mahasabha would undertake ‘khadga deeksha’ in order to protect the Hindu religion, the organisation has made ostensible claims that the swords were meant for protecting the country, its women and holy cows. Whereas, possession of lethal arms by individuals and groups is forbidden by the law of the land, he said, indicating that such activities were being organised to instigate communal riots ahead of elections.
“The Ministry of Home Affairs has recently issued a circular to all states warning them of the possibility of communal riots in the near future, and even a slight provocation can trigger a communal flare-up in Dakshina Kannada,” he said.
Members of the Vedike called for immediate and stern legal measures by the authorities with regard to the intended khadga deeksha, and called upon the district administration to initiate necessary legal action against organisers of the unlawful khadga deeksha programme. 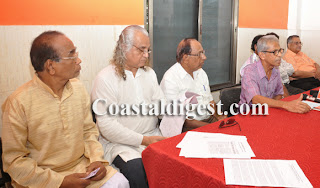 Speaking on the occasion, president of People’s Union for Civil Liberties – Karnataka P B D’Sa said that the police department ought to have taken suo moto action against the instigators, but failed to do so. Public awareness should be created on the intention of organising communally-disruptive programmes, he said, condemning the attitude of the police department.
Mangalore Central Committee president Ali Hasan said that when members of the Vedike had approached Mangalore (North) police station to file a complaint against the persons concerned, the police personnel were reluctant to register a case.
Instances of crime such as moral policing and illegal cattle trafficking are on the increase because of such police behaviour, he alleged.
The Vedike has filed a complaint against the intended khadga deeksha programme naming Hindu Mahasabha office-bearers Swami Pranavananda, Shravan Kumar Raikar, Rajesh Poojary, Umesh Moorthy, Lohith and Harish Acharya as the offenders.
Karnataka Missions Network president Walter J Maben, Choodamani Bangera, Catholic Sabha president Nigel Pereira, Aboobaker from Popular Front of India and PUCL member Kabir Ullal were present.