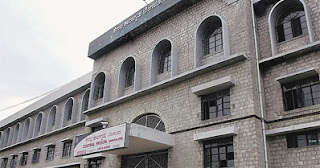 a). Notorious Terrorists like Abdul Nasir Madni is provided with all 5star facilities and nobody checks his cell normally. Daily he used to go out for his medical treatment as per order of Hon’ble High Court of Karnataka but Jail Staff never checked him while coming from outside. Jail officials themselves get afraid of him. The Chief Warden Dharnesh used to take care of him a lot and provide luxurious facilities to this Terrorist.
Being many convicts/under trial prisoners have died without any medical treatment and if any normal Jail inmates are sick inside the jail then they have to pay bribe to CMO inside then he will refer them outside hospital Where as Jail Administration is spending lakhs of Public money on the treatment of Madni.
The Kannadigas who are the natives of Karnataka State are treated like animals in Bangalore Jail. The Notorious terrorist Madni is in Jail Hospital Ward in Room No. 6 and Notorious Criminal Abdul Karim Telagi who is convicted for fake stamp paper cases is also staying in Jail Hospital Ward in Room No. 10 having lavish lifestyle in the Jail itself.
The Jail staffs whole day used to full fill their illegal demands. Telagi used to arrange many types of Fishes and Chicken from outside the Jail. Officials of Jail dis-regarding the Karnataka Jail manual and providing special status to them. Both of them having mobile phones to run their network from Jail.

In Karnataka Telagi’s conviction has been completed & his conviction is pending in Maharashtra and but till now Telgi is not being transferred to Maharashtra because here he is availing VIP facilities and there he cant avail such facilities.
b). Another Terrorists named Ibrahim enjoying in Jail Hospital Room No. 12 having mobile phone and Jail Staff never questioned him.
c). A Kashmiri Muslim Terrorist name Imran also kept in Special Cell and having mobile phone inside jail and running Indian Mujhahiddin Network and used to roam whole jail from morning to evening.

d). If any new Muslim Prisoner comes inside the jail even in any pity crime then Madni, Ibrahim, and Imran used to help them in their cases by providing legal or financial help so that they can work for their network in future. Its like creating terrorist in Jail itself.

2. Level of Corruption in Bangalore Jail :-

a). From main gate to inside the Jail, prisoner should carry huge money otherwise life will be hell. Jail menu start from first date as you enter in Jail. Next day new prisoner will be taken to clean toilets and jail premises otherwise you have to pay money to Chief Warder Dharnesh, now see the Jail menu with rates-

i). To keep away from Toilet Cleaning = Rs. 1000
ii). Shifting from dirty ward to another cleaned ward = Rs. 2000
iii). Special cell for 4-5 people first time = Rs. 5000
(Weakly one thousand for one cell)
vi). VIP cell first time for 2-3 people = Rs. 10,000
(Weakly two thousand only)
v). For special interview with jail inmates each entry = Rs. 1000
vi). For general interview with jail inmates each entry = Rs. 200
vii). To give home made food to jail inmates each time = Rs. 200
viii). Remissions to convicts without work may be in thousand to lacs.
ix). To visit court dates prisoner have to pay Rs. 200 to jail staff otherwise no attendance in court dates and jail will reply to court that escort is not available.
x). As bribe of Rs 200 to 500 has to be paid to the jail staff to visit the court date but the jail authority will not produce those prisoners before the court who are unable to pay the bribe amount but the prisoners who are hard core criminals also are produced before the Hon’ble courts on the given dates of hearing as they afford to pay the bribe amount.
xi). At the time of release Prisoner have to pay Rs 500 to Rs. 1000 for release otherwise release will be very late. Even staff ask money from the people those are waiting outside jail to take their person either release on bail or on completion of punishment.
xii). In Jail Mobile phones are available on sale through C.W. Dharnesh, Jailor Patil & Jailor Housmani. These mobile phones are available ten times costly than market value and every week prisoner have to pay Rs. 2000. If weekly money will not be paid to C.W. Dharnesh then he used to take off mobile phones from those jail inmates who are unable to pay weekly, ceasing of mobile phones are not recorded anywhere officially. After that these inmates either brutally beaten and kept in punishment room. To come out from Punishment room then prisoner have to pay Rs. 5000.to C.W. Dharnesh. Inside the jail in Ward No. 9 inmates play cards for betting money and they pay Rs. 10,000 daily to C.W. Dharnesh.

C.W. Dharnesh claimed that he has to give commission to I.G. & D.I.G. also, and he himself claimed that due to this reason he managed his superiors from transferring him to other Jails as his superiors are getting good amount of monetary benefit from C.W. Dharnesh by illegal collection of money from the jail inmates his officials do not consider his transfer and so he is permanently fixed to this jail only.

3. Violation of Human Rights in Jail with Kannadigas

a). Quality & Standard of food is not good and most of prisoners cook themselves inside the prison and they buy the goods either from Jail Canteen or from outside while poor Kannadiga prisoners eat bad quality of food.

b). Many poor and sick Kannadiga Prisoners are kept in Mental ward and handcuffed many times even some times these Prisoners used to beaten very brutally by C.W. Dharnesh and by other Jail Staff. Some Prisoners have lost their memory or paralyzed and some of them died due to low standard medical treatment. If they will pay money to Chief Medical Officer then he may avail good treatment from outside Hospital. Many times Jail authority denies to give medicine which are prescribed by outside Hospital to Jail inmates, and Jail doctors used to say that they are not having budget to buy medicines so some of the prisoners buy medicines from outside. If any prisoner found dead in Jail then they send prisoner’s body as alive to Victoria Hospital and then declared dead in Hospital. As a result in summary of Patient will be as got dead on way to Hospital.

c). Many of Kannadigas are very poor and could not avail costly Lawyers so that they can arrange their release either on Bail or may apply their appeal in apex court etc.

d). In Karnataka number of Lawyers used to talk about either face value in front of Judges or they talk about setting with prosecution or with Police etc. but never listen that they will fight the case on merits and poor Kannadadigas never get Justice. Even Legal Aid Service is also not helpful to poor Prisioners. Lawyers from Legal Aid Service mostly ask money or dont take much interest.

e). Justice is only for rich people in Karnataka not for poor Kannadadigas. In Karnataka mostly in Bangalore face value Lawyers charge Rs. One lac for bail matter and for whole case they will charge much larger amount .Even some jail officials arrange face value lawyers as well as surety those are in jail and are rich to fill their pockets with money.

Criminals should be punished for their crime, but anyone is innocent and lodged in jail without any crime should get Justice without delay. This story of Jail means “Jail inside Jail” on which I did lot of research & based on facts which I found from the Jail sources. This article is not story but a truth.